All is not well in Moorings Bay

We may not see it and we may not smell it, but algae-fueling pollutants are on the rise in Moorings Bay.

The City of Naples has been conducting rigorous monitoring of the ecosystem in Moorings Bay since 2008. Recent reports indicate water quality is declining as nutrient concentrations continue to increase.

The latest Moorings Bay Water Quality and Biological Data Analysis Report, conducted by Wood Environment and released five months ago, found ‘significant’ increases in concentrations of nitrogen, phosphorous, and chlorophyll. The Bay is now on the Florida Department of Environmental Protection’s impaired list for both phosphorus and nitrogen. 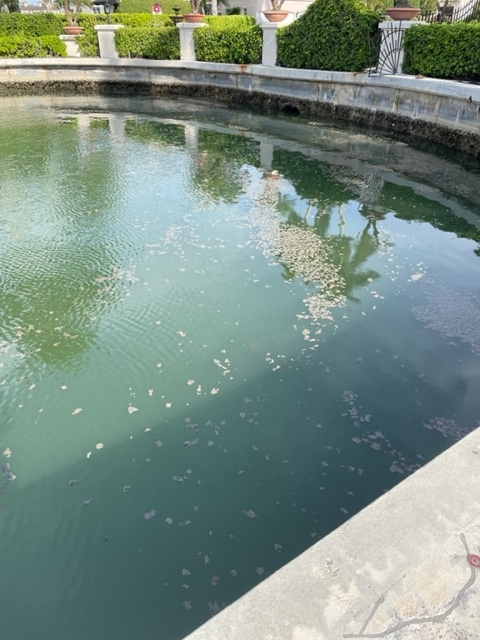 While this muck looks unpleasant it is actually a type of benign mat algae that comes up from the bottom of the Bay and floats to the surface. It is a cyclical, springtime observation that can be rather wide-spread throughout the Bay.

Measuring nitrogen and phosphorous reveals the concentration of nutrients in the water and nutrients can fuel algal growth. Chlorophyll is a measure of the amount of algae in the water and under certain conditions, algal growth can sometimes result in a harmful algae bloom. Scientists also found increasing trends in copper, turbidity and fecal coliform bacteria. Enterococci is an indicator of fecal contamination while copper can be harmful to aquatic organisms.

The Wood report concluded that the northern end of Moorings Bay (Seagate) generally had poorer water quality and the lowest fish diversity, which was thought to be driven by low dissolved oxygen. This is likely related to the location, furthest from Doctors Pass, where less ‘flushing’ occurs. The concentrations of nitrogen, phosphorous and chlorophyll were significantly higher here in the wet season compared to the dry season, indicating that stormwater inputs are the likely culprits for nutrients entering Moorings Bay, and our stormwater lakes are the chief conduits. Six stormwater lakes (Devils Lake, Swan Lake, Colonnade Lake, Hidden Lake, Lake Suzanne and Lowdermilk Lake) discharge to the Bay.

Keeping vegetative debris and other trash that can contribute pollutants from reaching our waterways is not a simple task but efforts are being made. Inlet filter baskets have been installed at 26 catch basins around the city and a further 23 are planned. A second street sweeper has been purchased to expand debris collection. Cleaning up the lakes is a major, ongoing undertaking (City Council approved spending $9.5 million on projects aimed at improving water quality, including lake restoration) but stormwater and fertilizer ordinances* have been passed by the City Council with the aim of improving the quality of water in Moorings Bay.

Residents have a role to play too. We can help by installing rain gardens, planting low-maintenance vegetation along seawalls, reporting violations to code enforcement, and knowing what our landscapers are applying to our lawns.

*Stormwater Ordinance Code Update—doubles the required stormwater volume to be retained onsite, now includes roof area in runoff calculations, and provides incentives to implement Best Management Practices (rain gardens, Florida-Friendly plantings) while the Fertilizer Ordinance—includes a summer ban of fertilizer application from June 1-September 30, no phosphorus allowed without a soil test, prohibits landscape debris from being blown into waterways, and no fertilizer can be applied within ten feet of any waterbody.